" /> Nellie The Rhino Has Been Rescued! – Peace 4 Animals 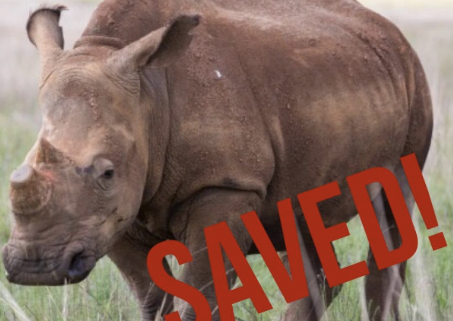 Nellie’s rough patch began after she was shot twice by poachers in 2016. Miraculously she survived, and while being treated for her wounds, she was found to be pregnant.

Nellie was soon sold by her owner who no longer wanted to keep rhinos on his farm after fearing more poaching attacks. She was moved to a new farm, but sadly had not taken well to her new environment; so much so that she had developed a deep depression, possibly PTSD, which was causing stomach ulcers. Ulcers in rhinos can harm the baby and eventually lead to death. Her owner feared that he would lose her and the baby due to depression, illness or injury, and decided to sell her.

Following the breaking news of Nellie’s terribly sad story, a South African-based charity intervened and offered to buy Nellie to ensure that she and her baby will be safe. They raised nearly 50% of the $30,000 needed in just fourteen days, but they still needed another $15,000 to move Nellie to safety.

Due to incredible and powerful community support, Nellie was SAVED! WAN, Peace 4 Animals & friend Duffy put in the final amount needed to save Nellie and her unborn calf from being sold to China. The collective effort from so many wonderful people to make this happen was unbelievably inspiring!

Nellie has been moved to her new sanctuary and is about to give birth! This is great news for the survival and future of her species!

The New Documentary “The Last Pig”
Scroll to top