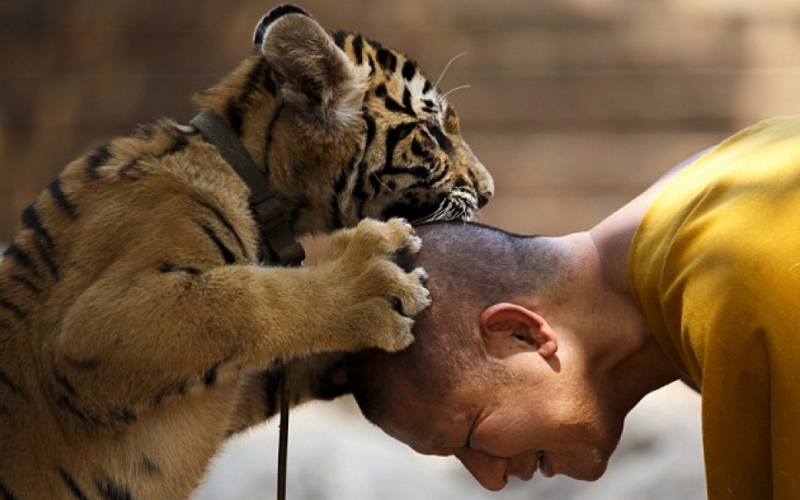 The first five of 147 tigers have been removed from the infamous Tiger Temple in Kanchanaburi by the Department of National Parks, according to Wildlife Friends Foundation Thailand.  This development sends a clear message to the rest of the world that the Thai government is serious about protecting its tigers, which sets an essential precedent.

"The exploitation, illegal trade and torture is going to stop," the foundation said in a post.

The controversial, but popular tourist temple, which brings $3 million dollars annually due to tourists visiting to play and take selfies with the animals, has long been accused of abusing and exploiting their tigers.

Last week, National Geographic magazine stated that it had uncovered evidence that the infamous temple was trafficking the tigers and selling them on the black market.

The tigers were tranquilized and transported to government-operated animal reserves in Ratchaburi, according to the Bangkok Post.

Although this seems promising, there are also rumors abound that the government has agreed to only remove 70 tigers, while the remaining 77 will be taken to a new zoo currently under construction. The logistics will need to be determined as far as the tigers’ path to freedom.

Past efforts to retrieve animals from the temple literally took an army. In April 2015, a team of 400, made up of department staff, soldiers, and police acted together to retrieve several moon bears kept without permits from the temple. More than 100 monks and staff blocked the entrance, which led the team to resort to hoisting the animals out with a crane.

If there is no similar resistance, 5-10 of the 140 tigers could be rescued and transported out of the temple per day. The hope is that they will then be housed in a true sanctuary.

Despite overwhelming evidence against the Tiger Temple, thousands of tourists continue to line up for selfies, which fuels the illegal tiger trade.